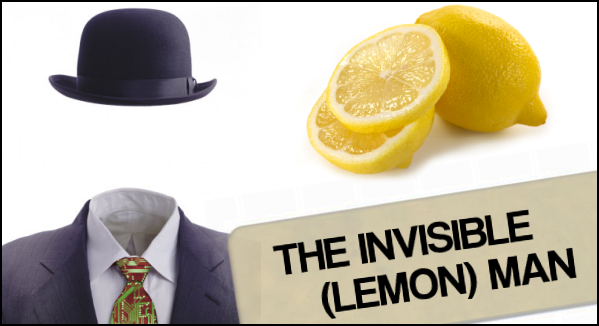 In 1995, McArthur Wheeler robbed two banks in Pittsburgh, Pennsylvania and disguised himself by rubbing lemon juice on his face. Yep, true story, and you can check it out HERE. To most people that sounds ridiculous, and it is no surprise to them that the video cameras captured him perfectly and he was arrested within hours of the robberies. But to Mr. Wheeler, he was under the impression that by rubbing lemon juice on his face the video cameras will not be able to identify him because lemon juice can be used as invisible ink, so he thought rubbing lemon juice on his face will make his face invisible to the video cameras. Again, to most people this is just silly, but to him it was his belief. A false belief which led to his demise as a professional bank robber.
So what does this have to do with investigative interviewing, other than being grateful for stupid criminals? Cognitive bias. Because Mr. Wheeler had the belief that rubbing lemon juice on his face will make him invisible to video cameras, he acted on that belief. The same thing happens within the context of investigative interviewing and criminal interrogations. For instance, if an investigator believes that when a person puts their hand over their mouth when they talk or if they look away before responding to a question they are lying, that investigator will act on their belief which will likely lead to the assumption of guilt. The same is true as well if the investigator believes that a truthful statement is always a clear, concise and chronological account of an incident, or that memory of an incident is like a videotape and is always correct, they are more likely to act on that belief and assess the information as truthful. Both instances have the ability to bias the interview and ultimately the outcome of the investigation.
Going deeper into cognitive bias we can look at the Dunning–Kruger Effect, which is a cognitive bias stating that relatively unskilled people can overestimate their own abilities and skills and thus suffer from illusory superiority, mistakenly assessing their ability to be much higher than it really is. Within the Dunning-Kruger Effect researchers found that unskilled people (1) fail to recognize their own lack of skill (2) fail to recognize the extent of their inadequacy (3) fail to accurately gauge skill in others and (4) they recognize and acknowledge their own lack of skill only after they are exposed to training for that skill.
Looking at those points above, when people fail to recognize their lack of skills or abilities or fail to recognize the extent of their inadequacy, they will not likely see a need for training. Their actions and performance (i.e.: within in interview or interrogation) will be based on their own beliefs, assumptions and biases which vary from person to person. By failing to gauge the skill of other people they may mistakenly assume that a self-proclaimed “expert” on lie detection or interview & interrogation actually has the experience to back it up, and not just knowledge from reviewing research papers and books and then then publishing blogs or videos online on the subject. If the person believes what the “expert” says, even if it is not true or accurate, they will rely on this false information and belief to make assessments, and in the case of investigative interviewing and criminal interrogations, influence their judgement regarding their veracity of the person they are talking with. Now, their confidence is increased but not necessarily their competence.
Lastly, within the Dunning-Kruger Effect they found that people recognize and acknowledge their own lack of skill only after they are exposed to training for that skill. For me, part of this includes debunking myths and improper thought-patterns that people have relied on for years regarding effective interviewing strategies and indicators of deception, and then teaching techniques that are effective and based on research, science and effective application within the field.
Bottom line, when life gives you lemons, make lemonade…don’t rob a bank!