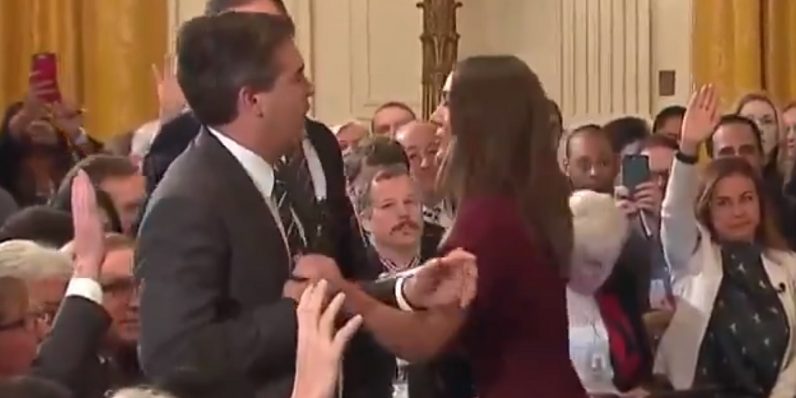 "You can see in the video, the intern came up to me — and attempted to take the microphone away from me. All I can say at that point is that I was trying to hang onto the microphone so I could continue to ask the president questions. Obviously, you know, I didn’t put my hands on her or touch her as they are alleging." -Jim Acosta, White House Correspondent from CNN, interviewed by Anderson Cooper.

Let's look at each statment made by Jim Acosta:

The use of “attempted” means that the action being described was not successful. The person making this statement, Jim Acosta, did not explain what interrupted this action, so we as investigators have to ask ourselves why it was an unsuccessful attempt. What happened to cause the break in the activity of the intern trying to get the microphone away from him? This is a key point and an area in their statement where we would go back and probe the persons account. Since this interaction was videotaped, we have the luxury of reviewing the video. During the video we see the female intern approached Mr. Acosta who was standing and holding the microphone with his right hand and she and reached with her right arm and he turned his body away from her. She reached again with her right arm and he turned away from her a second time. She then reached for the microphone with her left arm and she got hold of it, and Mr. Acosta pushed down on her arm with his left hand, which pulled the microphone in his right hand forward because the intern was still gripping it as well, and Mr. Acosta then put his left hand on the microphone in a two-hand hold and the intern let go of the microphone and sat down. That is what was missing from Mr. Acosta’s account at that point.

The use of “all I can say” is a phrase used to indicate that there IS more that happened, but all the individual "CAN say" is being limited by the individual. “All I can say” is NOT all that happened, it’s simply all the person at this point wants to say or is willing to say. Based on the video evidence we see what Mr. Acosta left out and what he was not willing to say at this time.

The use of “obviously” is unnecessary and is likely intended to sway the opinion of whoever he is talking with or whoever will be subsequently listening to the recording of the interview. Saying "obviously" suggests that there is no room for discussion, and can at times can be condescending and have the implication that if someone disagrees with the statement they just made or are about to make they are wrong, or even stupid, because they can’t see the “obvious” thing. This is compounded with the use of “you know”, which has similar implications. The use of “you know” often indicates that the person is trying to push their view on the individual they are talking with. They are making the assumption that the person already believes what they are saying, or that they should believe them. Both of these statements, “obviously, you know”, reduce the reliability of Mr. Acosta’s denial which followed, which was, “I didn’t put my hands on her or touch her as they are alleging.” In that statement, Mr. Acosta didn’t simply deny putting his hands on her or touching her, he added a tag line, “as they are alleging.” This leaves open the possibility that he did put his hands on her or touch her, but not “as they as alleging” but in some other manner. Some of the accusations in the media were that Mr. Acosta “assaulted” the intern, making it possible that he does not consider his actions to be an assault, which is what they are alleging. As with the statements above, this also weakens his denial.

When we conduct investigative interviews, the words people use are extremely important to focus on. This helps guide our questions, focuses on areas to probe their story, helps gather information and helps to assess the credibility and reliability of the information provided. The BELIEF Interviewing model and Investigative Statement Analysis are training courses that help investigators gather and assess information from people in an effective manner.